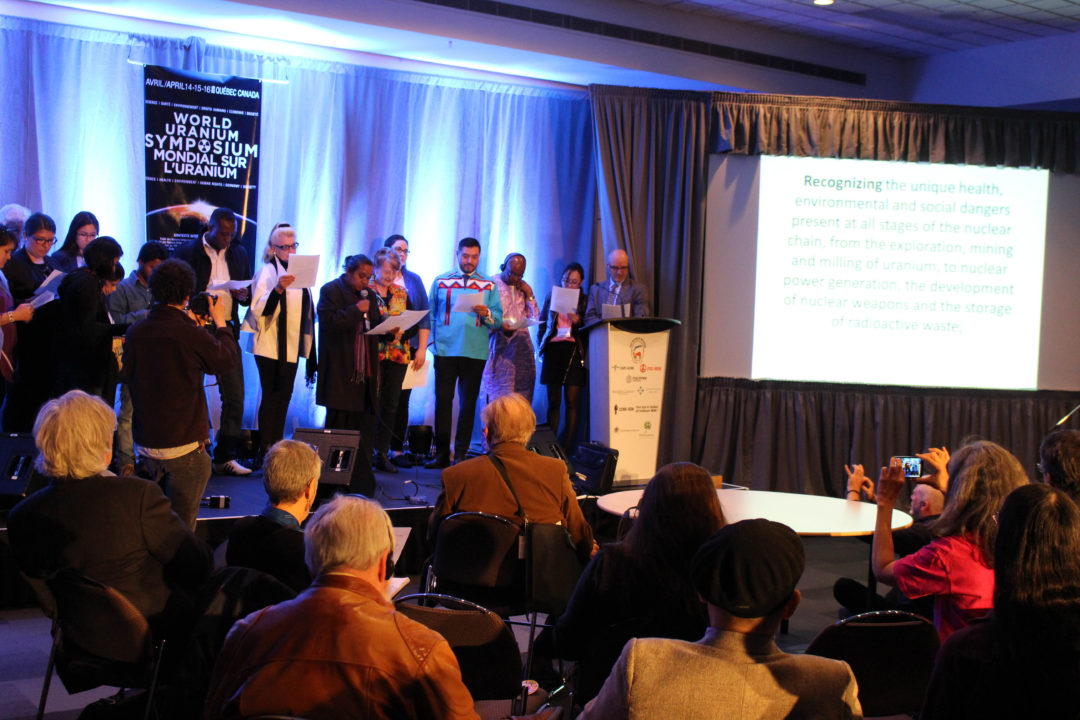 Barb Shaw and Dave Sweeney have now returned to Australia, and Peter Watts is staying in the USA to speak at several events this weekend. New York City is about to explode with peace and disarmament activists and organisations gathering from all over the world before the Nuclear Non-Proliferation Treaty Review Conference begins, which only happens every five years.

Barb Shaw’s speech on the third day of the Symposium is now online! She was on a panel discussing human and Indigenous rights vs. the nuclear fuel chain.

The Declaration of the World Uranium Symposium 2015

The Symposium explored all aspects of the nuclear fuel chain and their impacts
on all peoples and environments across the world. The Declaration addresses
everything from nuclear weapons testing, to poorly-regulated uranium mines,
highly contested nuclear reactors and the ongoing issue of the industry’s
waste and it’s specific impacts on Indigenous peoples.

“Its time for Australia to wake up to the realities of the nuclear industry
whether its mining, contemplating a reactor or hosting international
radioactive waste, and to make the switch to renewable energy.” Peter
Watts, ANFA co-chair.

“We’ve heard from people right across the world and evidence shows that
there is no best practice in the nuclear industry; to mine it, use it or
store the waste. We saw at the film festival that no-one affected by
radiation has got justice from any government or mining company right
across the world.” Barb Shaw, ANFA co-chair.

“The declaration is both a snapshot of the excesses and impacts of the
nuclear industry globally and a roadmap to exiting the nuclear era”, Dave
Sweeney, Australian Conservation Foundation.

The Australian delegation had input to the Declaration and now invite
individuals and organisations to endorse it and use it as a tool to further
a nuclear free future.

Protecting Manuwangku screened last night at the International Uranium Film Festival, taking scenes and voices from the heart of Australia to Quebec City. The film was very well received and followed with a Q and A session with Barb Shaw and Dave Sweeney. We missed having Dianne, Nat, and all the crew there to share the moment with us! Copies of the film will now spread to all corners of the globe, and the Muckaty story will continue to travel and inspire.

The Australian delegation has now left Quebec City and are visiting friends at the Kahnawake Mohawk Reservation, near Montreal. We’ll visit the Kanien’keháka Onkwawén:na Raotitióhkwa Language and Cultural Center and do an interview with the Kahnawake Radio Station before driving south, back into the USA.

We’ll continue to capture this journey to make a short film once we’re back home, sharing our connections and reflections. 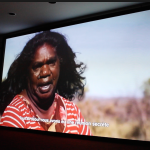 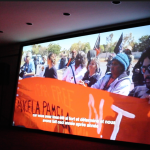 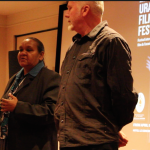 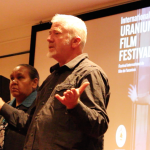 The morning started with a plenary on human and Indigenous peoples’ rights vs. the nuclear fuel chain. Barb Shaw took to the podium with the map of Australian uranium sites and talked from her heart. Her talk ended to a standing ovation.

The World Uranium Symposium finished with a (nuclear free) bang today, with a performance of a new song by famous Quebecois musician Gilles Vigneault. The youth of the Cree Nation took to the stage and told us about their 800-mile walk against uranium, from Mistissini to Montreal, during winter.

The Symposium Declaration was finalised and read aloud by a some of the inspiring people who shared their stories and work, including Barb. The text is available here, and the video recordings of all of the sessions will be available soon. Stay tuned for Barb’s speech at the plenary, also coming soon! We’re off to the International Uranium Film Festival now, and looking forward to the screening of Protecting Manuwangku on Saturday night! 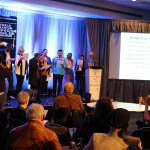 Day 2 of the World Uranium Symposium was another jam-packed day of workshops and plenaries full of inspiring and well-informed people from 25 countries on 5 continents. Peter Watts gave a workshop along with Katsumi Furitsu, from Japan, titled ‘From Hiroshima to Australia: health and social impacts of nuclear bombings’. The afternoon plenary focused on pulling together the discussions on nuclear power and nuclear weapons throughout the day, to feed into the Symposium Declaration, to be finalised and released on the last day.

The whole symposium went for a group photograph in front of Quebec City’s Parliament House, before we dashed back to the hotel for a Skype interview with NITV News. Peter and Barb sat infront of the big “Nuclear? No Thanks” flag and conveyed their thoughts on the symposium and the way forward for nuclear free movements in Australia and around the world.

Then we dashed off again to the opening of the International Uranium Film Festival, to be shown in Quebec City for the next two weeks. The Festival was opened by the Grand Chief of the James Bay Cree, Matthew Coon Come. 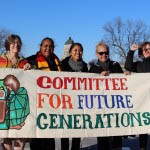 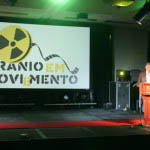 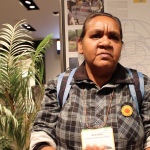 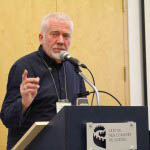 The team has made it to Quebec City after travelling through snow country and following the St Lawrence River from Montreal. Tonight we’ll meet-up with some of the other conference speakers and participants before it kicks off tomorrow morning. Peter Watts and Dave Sweeney are giving a workshop on Day 1 of the Conference on “Uranium mining and the nuclear fuel chain legacy in Australia”. 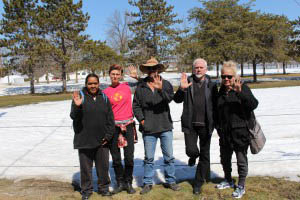 April 12- Update from the road

Barb, Debbie, Marcus, Peter, Dave and Gem hit the road today from New Jersey to Montreal, driving through gorgeous conifer forests and frozen lakes to hit the Canadian border, Mohawk country, at sunset. We passed through and headed over the St Lawrence River to Montreal for a feed and hopefully a good night’s rest. Tomorrow we travel another three hours to Quebec City to prepare for three days of sharing stories and making connections for a nuclear free future at the World Uranium Symposium. 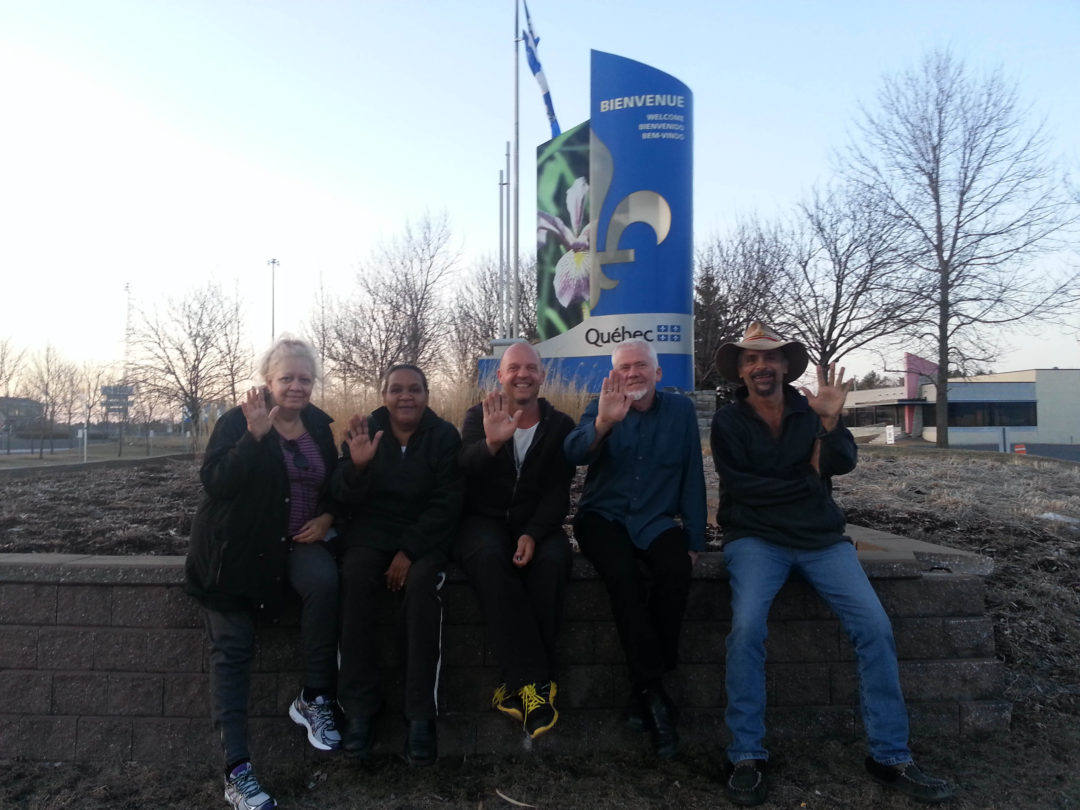 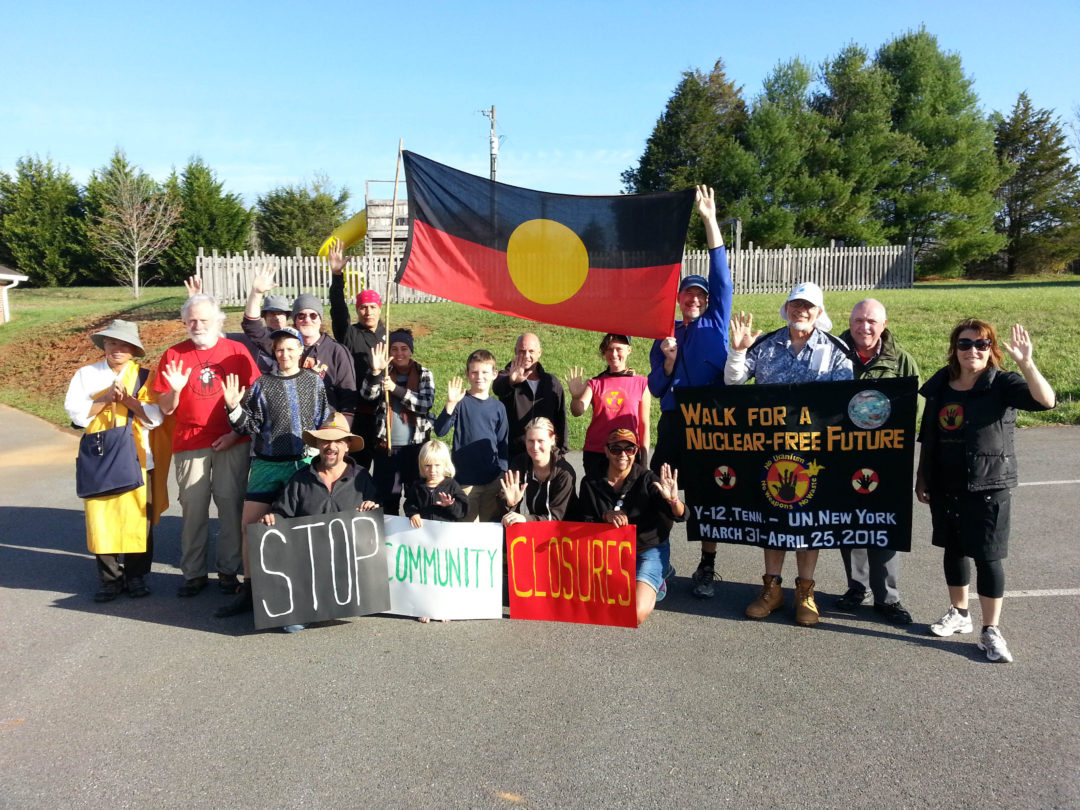 The journey to the World Uranium Symposium in Canada began as Peter, Marcus and Gem said goodbye to the Footprints for Peace group who are walking, running and cycling from the Y-12 nuclear weapons facility in Tennessee to the Nuclear Non-Proliferation Treaty Review Conference at the UN in New York. Before leaving, the group talked about the campaign in Australia to stop the forced closure of remote communities in Western Australia. We held some posters and took a group photo to send support to friends back home.

On the way to New York we stopped at Three Mile Island, the site of a major nuclear accident in 1979. Half of the plant is still operating while the rest remains an unresolved radioactive disaster. We took some photos and video and continued on our way. Peter Watts said…

“this is where our uranium ends up here and I feel sorry for the people living close by all of these reactors. Even if they’re told it’s safe, we know it’s not. Everyone and everything living close to reactors is affected by it… I feel sorry that stuff is taken from our country and hurts people in other countries and ends up in weapons. It’s irresponsible.” 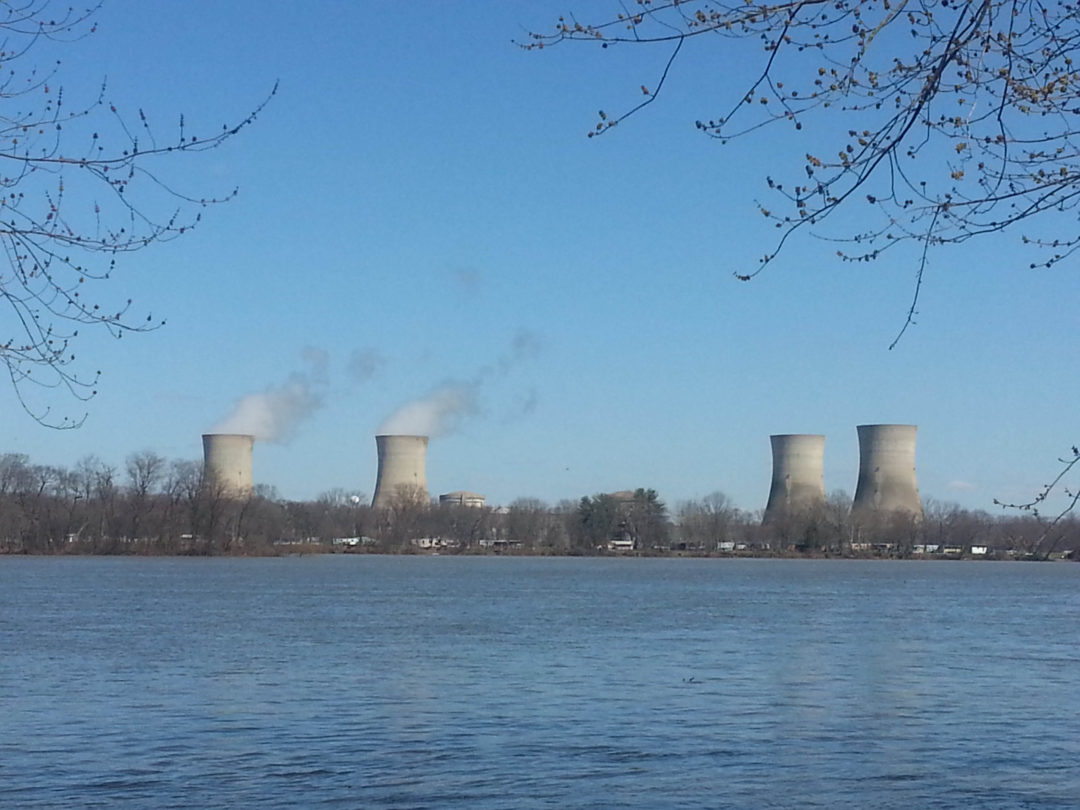 After navigating the extremely slow New York traffic we picked up Barb Shaw, Debbie Carmody and Dave Sweeney at the JFK airport, before cruising to our resting spot for the night. Next stop, Canada!

From April 14-16, communities from all over the world are gathering in Québec City, Canada, for the World Uranium Symposium. The Symposium will address a broad range of issues related to the nuclear fuel chain, including uranium mining, radioactive waste, aboriginal rights and nuclear weapons proliferation.

The Australian Nuclear Free Alliance (ANFA) has been invited to contribute stories of nuclear resistance and the impact of the nuclear industry on Aboriginal communities in Australia. Formed in 1997, ANFA brings together Aboriginal people and relevant civil society groups concerned about existing or proposed nuclear developments in Australia, particularly on Aboriginal homelands.

Your support will enable three Co-Chairs of ANFA- Peter Watts, Glen Cooke and Barbara Shaw- to take up this rare opportunity to share the Australian nuclear story with an international audience. While in Québec City, the ANFA delegates will be able to meet with Mohawk and Cree First Nations peoples, who are leading an inspiring campaign against nuclear expansion on their territories. 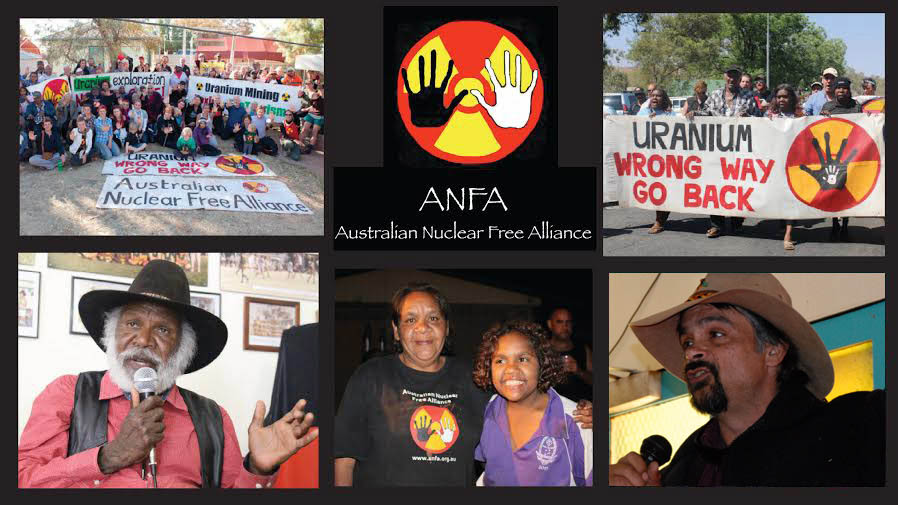