The journey to the World Uranium Symposium in Canada began as Peter, Marcus and Gem said goodbye to the Footprints for Peace group who are walking, running and cycling from the Y-12 nuclear weapons facility in Tennessee to the Nuclear Non-Proliferation Treaty Review Conference at the UN in New York. Before leaving, the group talked about the campaign in Australia to stop the forced closure of remote communities in Western Australia. We held some posters and took a group photo to send support to friends back home.

On the way to New York we stopped at Three Mile Island, the site of a major nuclear accident in 1979. Half of the plant is still operating while the rest remains an unresolved radioactive disaster. We took some photos and video and continued on our way. Peter Watts said…

“this is where our uranium ends up here and I feel sorry for the people living close by all of these reactors. Even if they’re told it’s safe, we know it’s not. Everyone and everything living close to reactors is affected by it… I feel sorry that stuff is taken from our country and hurts people in other countries and ends up in weapons. It’s irresponsible.”

After navigating the extremely slow New York traffic we picked up Barb Shaw, Debbie Carmody and Dave Sweeney at the JFK airport, before cruising to our resting spot for the night. Next stop, Canada! 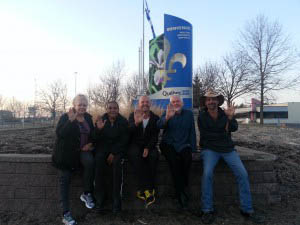 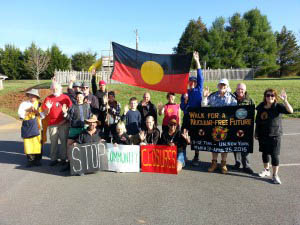 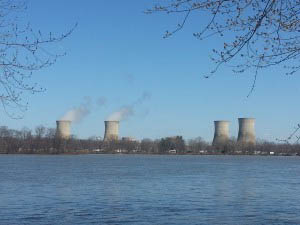